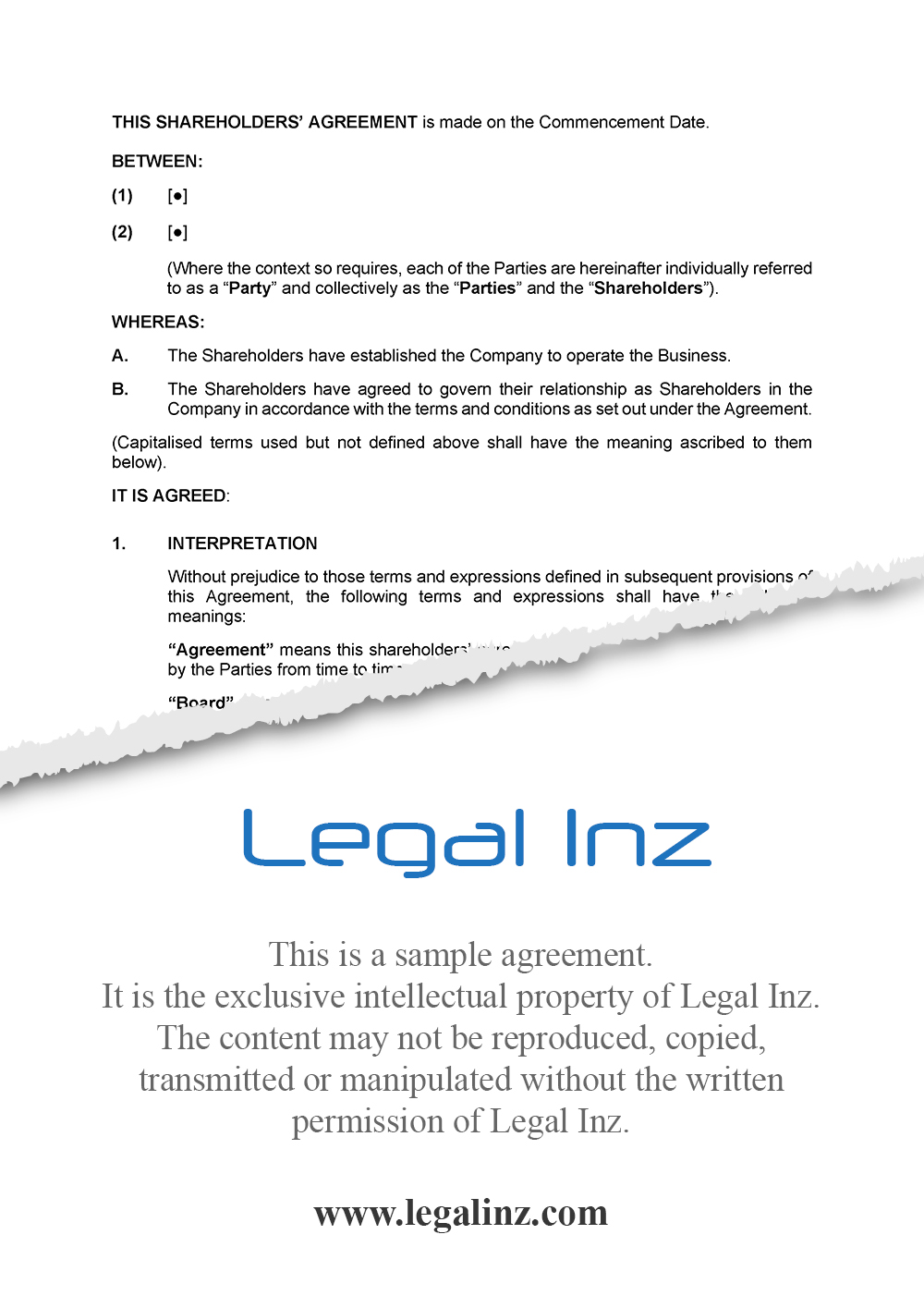 You can get your Shareholders Agreement in 3 simple steps

Just answer a few quick questions to make your shareholders agreement in minutes.

Save and instantly download your draft of shareholders agreement.

Print and sign your shareholders agreement to make it legal and binding.

Gold includes everything in Silver, plus:

Platinum includes everything in Gold, plus:

What is a shareholders’ agreement?

Who is a shareholder?

Any person or entity who owns shares of a company is termed as a shareholder of that company. Shareholders are entitled to certain benefits that arise out of the ownership of shares. Any financial profits, called dividends, that the company makes is in turn divided between all the shareholders of the company in proportion to their shareholding.

Why is there a need to enter into a shareholders’ agreement?

What does a shareholders’ agreement cover?

A shareholders’ agreement usually contains the below mentioned terms:

1. Personal information of the parties

2. Commencement date of the agreement

An agreement should always specify a starting date. This is the date from which the legal relationship between the shareholders would commence.

This clause would specify the total number of shares each shareholder would hold along with their respective shareholding in the company. This is important since many rights that accrue on the shares would be covered in terms of the proportion of shares that a shareholder would hold in the company. A certain number of shares may grant certain associated rights as well as dividends that accrue on such shares.

4. Company and its business

Since it is the shareholding structure of a particular company that form the subject matter of a shareholders’ agreement, it is important to describe the company by its name, details, and the nature of business that the company intends to do.

5. Appointment of the Board and its structure

A shareholder’s agreement should typically have a clause which provides for the appointment of the board of directors, commonly referred to as just the “Board” and the powers of the board. The board is an executive panel which consists of directors who are appointed by the shareholders of a company. The board can be handed important executive decisions to be made for running the company. It is safe to say that the board is responsible for the overall management of a company.

7. Rights of Majority and Minority Shareholders

Both of the above provisions can be included in a shareholders’ agreement if the shareholders have mutually agreed to the applicable consequences.

This is one of the most important clauses in a shareholders’ agreement as it specifies the law which will govern the agreement. It also outlines the jurisdiction which would govern any disputes if litigation or arbitration is filed in the future. This clause attains even more importance in cases where parties to the agreement are based in different jurisdictions.

A shareholders’ agreement could incorporate additional terms such as confidentiality, budgets and financial information, shareholders’ meeting, and termination of agreement to name a few.

Our online form provides for a range of customisations that cater to all clients on a case-by-case basis. We provide our clients with more freedom and control in terms of what their shareholders’ agreement should cover. Please see our different packages to see various options available to the clients in terms of personal customisation of their shareholders’ agreement.

My experience with Legal Inz was brilliant; i received first class assistance with the incorporation of my business and the opening of the bank account.Why Legal Inz: I received a recommendation from a close friend who had used Legal Inz before.

Every review is a Powerful reﬂection of Client experience

Verify our reviews on Shopperapproved, Trustpilot and Google

Legal Inz strives to meet the needs of all of our customers. If you are not completely satisfied with our services, please contact us.

Disclaimer: Legal Inz is a legal consultancy firm duly licensed in Ras al Khaimah, United Arab Emirates. Our wills draftsman is duly registered with the DIFC Courts Wills Service. Communications between Legal Inz and its clients are subject to the Privacy Policy. Your access to our website is subject to the Terms & Conditions.